Court Finds Pool With Two Shallow Ends Could Be Dangerous 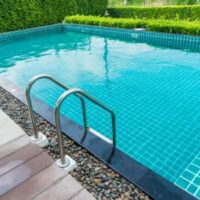 As a general rule, homeowners and residences with pools are not liable to people who are injured in their pools, so long as the injury is from the normal, common usage of the pool, and so long as there is nothing hidden or unusual about the pool that would make it dangerous.

But there is also something in personal injury law that is known as the hidden trap. The hidden trap is something that is hidden, concealed, or so out of the ordinary, that even though an inherent danger may be obvious, the victim can still recover.

As an example, let’s say that a store has a mat at its doorway. You could not sue for tripping over the mat. It is obvious, and can be seen with plain eyesight. But what if the mat had something underneath it that caused it to have a bump right in the middle?

You wouldn’t see that bump, because the whole mat is the same color. Now, instead of the danger of the mat being open and obvious, a victim could say that the danger was actually a hidden trap, not readily observable to the casual person.

Two Shallow Ends of the Pool

Another example of a hidden trap actually comes from a recent case in Florida. In the case, someone dove into a residential pool and was injured. Normally, the victim could not recover for just diving into an otherwise ordinary pool. But this pool was quite different.

The victim alleged that this pool actually had two shallow ends–by itself, an odd and unexpected characteristic for a residential pool. Making the danger even more hidden was that the stairs on the end where the victim dove, were concealed by planters. Thus, the victim, seeing he was on the opposite end of the pool from the stairs (where the shallow end usually is), assumed that the side he was diving into was deep.

Pool Was a Hidden Trap

The court said this was a classic example of a hidden danger, and allowed the victim to try to make his case in front of a jury. The case is a good example that you should never assume that a danger is obvious, even if the Defendant or the insurance company tries to claim it is.

Courts have very specific definitions of what a hidden danger actually is, and often it can allow a victim to recover damages where they ordinarily couldn’t recover.

Were you injured in or around a pool? We can help.  Contact the Tampa personal injury lawyers at Barbas Nunez Sanders Butler & today. Schedule a consultation today.