Be Smart, And Safe On A Bicycle 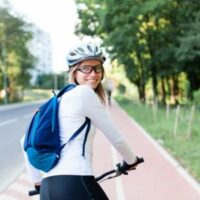 The year 2020 was a year of contradictions when it came to accidents. Just as people started to stay at home and business closed because of Pandemic related shutdowns, so too did accidents of all kinds, go up. Included in that statistic are accidents involving bicyclists.

Cycling Accidents Are on the Rise

The National Safety Council estimates that bicycling deaths have gone up by more than 40% in the last ten years, and yes, they went up again in 2020.

Most bicyclist deaths involve collisions with vehicles. And while intersection accidents are most common for cars, for cyclists, the opposite trend is true; most accidents happen when just riding in a lane of traffic.

Unfortunately, rules of the road for cyclists aren’t published pre promoted very much. Cyclists both have separate rules, and need to respect vehicle rights of way, but they also have rights of their own, and unfortunately many vehicle drivers don’t respect or realize cyclists rights of way.

Rules and The Rule of Thumb

As a general rule, if you don’t know much of anything about the rules for bicyclists, a good rule of thumb is to simply do what cars do. Drive in the same direction as traffic, on the same side of the road, and obey the same traffic signals and signs. Outside of that, to keep yourself safe if you are riding a bicycle, there are some common sense things that you can do.

Wear a helmet-Because your feet are attached to the bike’s pedals, when your bike gets hit or topples over for any reason, it is likely your head will be the first thing to hit the ground. This can be catastrophic; wearing a helmet can save your life. And don’t ever reuse a helmet that has already been in an accident.

Remember blind spots – Cars can’t always see you, even if you can see them. Generally, if you can’t see the driver of the car he or she likely can’t see you either.

Opening doors – Cycling by or near parked cars is very safe; after all, those cars aren’t moving, right? Except that in cramped areas, an opening car door can be extraordinarily dangerous for a bicyclist. And, many car occupants don’t even stop and look before opening a door once they are parked.

Signaling – Signal your turns, just as a car would. A left hand extended indicates a left turn, and either your right hand, or your left hand going in the air, can signal a right turn. Be predictable; avoid last minute turns, or turns that drivers wouldn’t expect that you make.

Night riding – Your bike doesn’t have lights the way cars do. Wear bright clothing and equip your bicycle with lights, and if you can, avoid roads that don’t have installed lighting or which are dimly lit.

Contact the Tampa personal injury lawyers at  Barbas Nunez Sanders Butler & Hovsepian if you are injured as a pedestrian or a bicyclist. Schedule a consultation today.

By Stephen M. Barbas | Posted on November 17, 2022
Skip footer and go back to main navigation