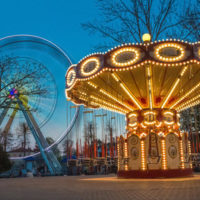 Ferris wheels, hot dogs, salt-water taffy, roller coasters, and the sounds of the surf in the background: Florida’s boardwalk was designed for safe, family fun. Ever since the end of the Civil War, boardwalks have provided a relatively inexpensive place to escape humdrum days spent in the factory, or, more recently, fast paced urban living. Nowadays theme parks and amusement parks are cropping up everywhere, and Florida has its share of the giant fun parks—95 in fact, in addition to over 200 more that travel with carnivals and the like. With all the competition for thrills, the attractions at these parks are ever faster, taller, and more exciting. But what happens when fun and titillation turn to illness or injury at the park? That is when you need sound legal representation to get you the help you deserve.

Sometimes an injury is related to the capriciousness of the weather. Such was the case for Briana Giunta, who was the victim of a heavy tree branch breaking loose and hitting at a carnival her during a Poe Springs storm in 2015.

More often, injuries occur while boarding, exiting, or experiencing ride attractions. Nearly 40,000 emergency room visits occurred in this country just last year as a direct result of water park or amusement park rides. Thirty of these were fatalities. In Florida, serious injuries range from lacerations, to hip fractures, brain injuries, and even death.

What Kind of Oversight do these Parks Have?

The US Consumer Products Safety Commission monitors carnivals and fairs in Florida, and is responsible for investigating injuries. The larger theme parks have no state inspections. Why? The International Association of Amusement Parks and Attractions have lobbied federal oversight handily. They claim that there is no indication that federal oversight or regulation would improve consumer safety. Although SeaWorld, Universal and Disney all claim that safety is their top priority, none provide much information about the oversight into operations, although they do have full-time safety staff on site.

The Chief Safety Officer of Disney, Greg Hale, claims that only 3-5 percent of safety incidents are caused by mechanical failures. He said customers need to focus on following park rules. Nonetheless, injuries occur, and they occur with alarming regularity.

If you have been injured in an accident at an amusement park, you deserve compensation for your injuries. The experienced team at Barbas, Nunez. Sanders, Butler & Hovsepian in Tampa will help you get the maximum settlement you deserve.