Golf Carts Are Being Used In Ways That Can Be Dangerous 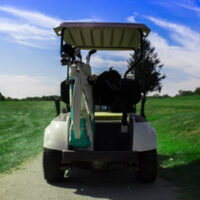 When we think of relatively safe sports, golf is probably close to the top of the list when it comes to safety. But it’s not the sport of golf that creates dangers–it’s often the use of the golf cart, and the fact that nowadays, carts have now become as much for transportation and recreation, than they are for golfing.

Golf carts are intended for use on a golf course, areas that are relatively smooth, with no rough terrain, and for travel at moderate speeds. But more and more, golf carts are becoming replacements for cars in areas that are more compact or more congested, and where a golf cart can get you to the local shop down the street.

That’s for urban use; in country or rural areas, golf carts are often asked to traverse rocky, unstable terrain, much like an all-terrain vehicle would.

And even more dangerous, golf carts are often used by kids or teenagers as recreation vehicles; they are often raced, taken over rough or uneven terrain, or overloaded with kids hanging off every part of the golf cart.

Almost all of these uses, under the right (or wrong) circumstances, can be dangerous. That’s because a golf cart has none of the protections that cars, or even ATVs, have. They do not have the shocks for rough terrain, nor do they have the tires for them. There are literally almost no safety features to speak of, when it comes to golf carts

They are not balanced to take sharp turns and can easily flip over. When they do flip over, the result can be catastrophic because the roofs of the carts are not reinforced to withstand the weight of the overturned cart. Additionally, parts of the cart that kids often hang off of, like posts or poles, aren’t intended to withstand that kind of pressure.

The typical golf cart has no doors, and often, no windows, aside from having no seat belts.

Who Gets Injured and Who is Liable?

When used improperly, golf carts can injure not just the people inside of them, but other people as well, such as cyclists or pedestrians, and even drivers of cars, who may have to swerve to avoid erratic golf cart driving.

Parents and adults who allow teens and young children to use golf carts can be liable for negligent entrustment when the carts end up abused or when the carts cause accidents and injuries. That includes liability when so many kids load up a golf cart that it becomes unstable, or when teh golf cart is driven at unsafe speeds.

Owners of carts can also be held liable when carts are not properly maintained; many people don’t put as much effort into keeping golf carts maintained as they would cars. The result can be faulty brakes, faulty tires, electrical problems, and any other number of operational problems.

Contact the Tampa personal injury lawyers at  Barbas Nunez Sanders Butler & Hovsepian if you are injured on or because of a golf cart. Schedule a consultation today.