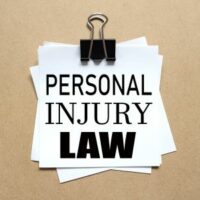 A recent change of a relatively obscure court rule could have big effects on accident victims- especially those who are looking to collect punitive damages. The new rule change makes it easier for Defendants to appeal awards of punitive damages. But the big change is that they can now do that in the middle of your case, before your case ever even gets to trial.

In almost every situation if a party feels that a judge has made a mistake, or a bad decision, the party has to wait until the end of the case—usually, the jury’s verdict—in order to appeal.

Rarely will the court allow a party to stop an entire case right in the middle, so that it can run to an appellate court and appeal a decision that a judge made. You have to see the case out to its conclusion, and then appeal any bad decisions you may think the judge made.

But now, if the judge decides at that hearing that the victim can pursue punitive damages, the Defendant can then appeal that decision. Because appeals can take a year or more, the underlying injury case—and thus, your settlement or verdict—is also on hold, while the appellate court decides whether the judge’s decision to allow you to ask for punitive damages from the jury, was the correct decision.

Defendant’s Will Likely Use New Rule

Because Defendants of course hate punitive damages—not to mention the financially invasive discovery that comes with it—it is expected that many Defendants will stop a case in the middle, to appeal a judge’s decision that the victim can pursue punitive damages.

That’s fine for a Defendant—they are in no rush. It is the victim that suffers; a victim who is in need of compensation to pay bills, wages, or to help him or her in life after his injuries.

Parties looking for punitive damages will now have to weigh whether it is worth it to ask for them, knowing that if the judge says yes, you can ask for punitive damages, that there is the chance of a delay because of an appeal in the middle of the case.

Contact the Tampa personal injury lawyers at Barbas Nunez Sanders Butler & today if you are injured in any kind of accident and feel you may be entitled to punitive damages. Schedule a consultation today.