Personal Injury in the Form of Defamation of Character 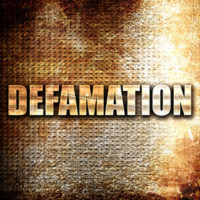 In a culture that is increasingly tolerant of nasty comments and snippy public remarks, when is the legal line crossed? Is anything out of bounds these days? An experienced personal injury attorney can help to answer questions about your individual circumstances.

What exactly is defamation of character?

The legal definition of defamation refers to false statements that harm someone’s reputation. It generally can be divided into two categories: libel refers to a somewhat permanent form of defamation, such as a broadcast or written statement. Non-broadcast verbal defamation is referred to as slander.

It surprises some people to know that statements of opinion, whether or not they are correct, may not be considered defamation. For example, an employer could say that the person under consideration is lazy. That would not be considered slanderous, even if it were not true.

Employers are protected from defamation suits in Florida, as long as they are not behaving maliciously and are acting in good faith. Proving otherwise may be a challenge in a court of law.

Can I Sue for Defamation, Slander or Libel?

While some might argue that the Constitution guarantees the freedom of speech, the law does protect those whose lives might be harmed or ruined due to the lies of others. The criteria for defamation is quite clear:

Again, statements that are mean are not necessarily defamatory. Saying someone’s dress is ugly is certainly impolite, but it does not meet the standard of being objectively false, since it is an opinion. It is not defamatory.

Additionally, being able to show demonstrable injury is crucial. To be sure, having hurt feelings does not qualify here. Damage to one’s reputation must be quantifiable; it must correlate to the loss of property, business, money, or relationships in order to be legally viable.

If You Have Been Defamed

If you have experienced a quantifiable loss due to incorrect statements of fact made by someone to a third party, you may have a case for defamation of character. The legal team at Barbas, Nunez, Sanders, Butler & Hovsepian will provide a free, confidential consultation and evaluate your case. Contact us today in Tampa or St. Petersburg.