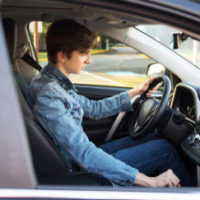 If you have a teen who has just acquired a driver’s license, chances are you are experiencing a bit of anxiety. There is good reason for apprehension as you turn over the car keys to a new driver: statistics relate some alarming facts about driving behavior and accident rates. If your teen is involved in a collision resulting in serious injuries, a good personal injury lawyer can help.

Why Teen Drivers are at Risk

Teen drivers are at greater risk of automobile accidents than other age groups for several reasons:

These risk factors lead to some disconcerting facts about teen drivers:

Naturally, because teens have less experience behind the wheel they are less likely to anticipate problem situations and react calmly and safely. For them, defensive driving is more important than ever:

Any serious accident is stressful; when the collision involves your child the levels of anxiety increase exponentially. While you deal with the emotional upheaval of injuries, let the experienced team at Barbas, Nunez, Sanders, Butler & Hovsepian deal with the legal issues. Put your trust in us: we will fight for your best interests. Contact us in Tampa and St. Petersburg today for a free, confidential consultation.