The Importance Of Notice In Slip And Fall Cases 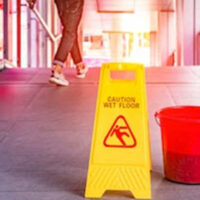 When little kids get into trouble, the first thing they often say in their defense is “but I didn’t know!” They may say they didn’t know the rules, or they didn’t know what they were doing was wrong, or that they just weren’t aware of the situation so as to be held responsible for the consequences of their actions.

But can a business do the same thing? Is it a valid defense if you fall on someone’s property, for the business to simply say they had no idea that the dangerous condition existed, and had they known, they would have done something about it?

It is a valid defense—but a limited one, and one that many businesses try to use, way too often.

When it comes to there being a dangerous condition on someone’s property, there are two different kinds of notice: actual and constructive.

Actual notice means that a business actually knew, for a fact, that a dangerous condition existed on their property but did nothing about it.

So, for example, imagine that a shelf was stacked with merchandise so high, the merchandise became unstable, and fell on someone’s head. Someone from the store likely stacked the merchandise that way, at some point. So, the store (through its employees) clearly knew about the dangerous condition.

The same holds true with a spill on the floor that sits there as store employees walk past it, doing nothing. Again, the store employees saw the spill, and did nothing about it, giving them actual knowledge of the dangerous condition.

So, for example, if there was water on the floor, it may be questionable if the water was there long enough for the store to know about it.

But if the water were muddy and dirty, and had footprints in it, and had been spread out by those footprints, it would be safe to assume that the water has been there for an extended period of time—long enough for people to walk through it, and smear it over a larger distance. That would mean it was more likely that the store would have constructive knowledge that it existed, regardless of whether it actually knew the water was there or not.

Contact Barbas, Nunez, Sanders, Butler & Hovsepian for assistance. Schedule a consultation with our Tampa personal injury lawyers today if you have been injured in a fall on someone else’s property.