When Can You Get Punitive Damages In An Injury Case? 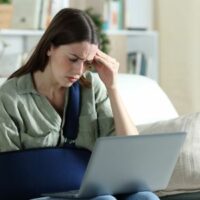 The civil justice system is intended to make you whole for losses that you have suffered as a result of an accident. It is supposed to put you in the same position that you were beforehand, using money as a way to try to compensate you for financial, emotional and physical damages. It is not intended to deter, or to punish, the Defendant.

Except, that is, when it comes to punitive damages.

Punitive damages are more like the criminal system, which is designed to punish people for their wrongs, and act as a deterrent to society. Although controversial, many see punitive damages as a way to deter the most careless behavior; behavior that goes beyond just simple accidents or carelessness.

At some point before trial, when the evidence has been gathered, and it appears that you may have the ability and evidence to show that the Defendant acted with recklessness, or disregard for safety, then you can present that evidence to the judge, and ask the judge for permission to ask the jury for punitive damages when the case gets to trial.

You are not proving your entire case, just showing the judge everything you have, which, you argue, is enough to warrant punitive damages, if all the evidence you have is believed by the jury.

If the court agrees, it doesn’t immediately award the punitive damages; the court just allows the jury to consider punitive damages (and that’s assuming the case doesn’t settle, and it actually gets to a trial in front of a jury).

When are They Awarded?

Usually, punitive damages must involve something “extra,” such as knowledge of a dangerous behavior, or such indifference to the safety of others, that it shows that the Defendant just didn’t care about others’ safety.

Accidents caused by DUI are an exception; regardless of the Defendant’s intentions, victims can almost always get punitive damages against someone who causes injury because of a DUI.

Companies present a special problem with punitive damages. You do not automatically get punitive damages against a company, just because their employee was reckless or very careless. You must show that the employer actually participated in the reckless behavior, or knew of it and allowed it to happen or continue.

This can be a difficult burden for a Defendant to prove, especially when an employee just goes far beyond the scope of his or her duties and injures someone else.

Are you entitled to punitive damages? You may be. Contact the Tampa personal injury lawyers at Barbas Nunez Sanders Butler & if you are injured in any kind of accident. Schedule a consultation today.